Turkey needs to adapt its energy policies to speedy geopolitical and technological changes, according to Mehmet Öğütçü, chair of the Bosphorus Energy Club.

Speaking to the Hürriyet Daily News, Öğütçü stressed that the country needs to have an integrated strategy with foreign and security policies that support its ambitious energy goals.

Tell us the challenges Turkey will have in dealing with the energy sector.

Turkey has very ambitious goals. It wants to become one of the 10th biggest economies in the world by 2023, which looks unlikely. Turkey also wants to become a powerful regional force in the global system. In order to be both, you need energy, and in that regard we are poor. We import more than 90 percent of the fossil fuels we use and we depend heavily on financing. We rely on foreign money. It is very important to obtain foreign credit, loans, equity, etc. to finance this growth in favorable terms.

The other critical issue is adapting to breakthroughs in technology. We don’t have much in way of technology. We have to import it and this is a huge burden on our current account balance.

Another issue is climate change. Environmental policies as well as other man-made environmental disasters are bringing a huge burden on the economy.

So, the main challenge is finance?

We are very short of finance and we need $120 billion of investment in energy over the next decade. This brings me to the issue of trust. There is an increasingly lack of trust in the Turkish leadership, the economy and the approach of foreign policy in our region. Whether it’s right or wrong, there is such a perception.

Unless we restore confidence, it will be very difficult to achieve our ambitious goals. Credit rating agencies have significantly downgraded Turkey. We cannot bring quality investment to the country. They look for stability, contract sanctity, rule of law and a reliable framework within which they can operate.

You had also mentioned technology as a challenge.

It is not military power nor the size of your economy, but what defines the position of your place in the world is how good you are in technology, R&D and innovation. There are new trends in education. Unless you adapt to these trends, you will not be able to compete on a global-scale. While there are exceptions, I do not think where we are is befitting for a country of 80 million with ambitious goals.

When you look at Turkey’s corporate landscape, it is difficult to see which companies can be included in the global league of competitiveness and innovation. In energy, if you lump together all the energy companies in terms of financial power, they cannot even equal Malaysia’s Petronas.

In nuclear technology, we have the Akkuyu Nuclear Power Plant project. For decades, we have wanted to have nuclear energy and the western countries did not want to share technology. Now, we are doing it thanks to the Russians. It is an advanced technology, but we are doing the right thing with it because technology trends are changing.

There is no longer a trend for a large scale nuclear power plant, like the one Turkey aims for. We now have smaller reactors modelled on the basis of nuclear submarines—300 or 400 megawatts for $300 or $400 million. Ours is gigantic with a price tag of $25 billion, which will likely rise.

The cost will be very prohibitive—13 cents per for kilowatt hour, while the cost of solar and winds are coming down to four or five cents.

I am in favor of nuclear energy development as part of our energy mix, but we need to follow the trends. Same with renewables. We don’t need 3,000 square meters in which all these panels will be placed. If you invest today without knowing the technological developments in wind and solar, you will end up with outdated and expensive technology.

What are the other challenges?

Another challenge for Turkey is its position in the new world order, which has not yet been settled. We see a new polarization in the world map. Trade wars will change the landscape significantly in the energy sector too. Energy is flowing from untraditional sources. Consumers are changing. The largest ones are in the Asia-Pacific. Not only has the energy game changed, the rules have changed as well as the players.

Russia has to maintain its traditional markets like Turkey, for instance, which is a huge consuming nation. Consumers are the kings of the market and unlike in the past we have an abundance of energy. But technology is coming as a disruptive force, not only as a blessing. Technology is quickening the pace of transformation.

You have to be dynamic in adapting to changes. Turkey has to create its own energy revolution. By that I mean first Turkey needs to have an integrated energy strategy in which you have the key elements of environment, foreign and security policy, competition policy, trade and investment. Energy is related to many policy areas, so you have to think about it in a broader context.

If your goal is to become one of the largest economies in the world, how do you ensure there is an energy strategy which will back it? How do you ensure foreign and security policy will serve this goal? You cannot have confrontation with your neighbor, who hold these resources. For instance, the East Mediterranean and the Kurdistan region of Iraq are two potential areas where Turkey could be a game-changer rather than a game-spoiler.

If you flex your muscles too much, then you will lose your allies. For a country in Turkey’s position, you have to be a soft power, but by this, I don’t mean you should appease those who pose security threats. However, as of 2018, the only friend we have left in the Middle East is Qatar. We do not have open dialogue channels. Egypt is going to become a major force in the business for liquefied natural gas (LNG) and Israel wants to work with Turkey.

So, your main criticism to Turkey’s energy policy is the lack of strategic thinking?

My main criticism is lack of foresight. If I were to take action today, I have to be able to see 20 years ahead. This requires smart diplomacy. So, I think there is a problem in making energy policy. All the key stakeholders are not involved. We have to develop this thinking and bring in the wisdom of others.

It is about governance; how you govern your energy policy. Right now, most investments in energy have been taken by private sector. The role of the state is diminishing, which is a good development. Governments should not intervene too much in energy projects and investment. They have to provide a stable framework, where players can operate on equal footing with their global competitors.

Energy is our soft underbelly, especially in fossil fuels. Energy is a national security matter. It has to be handled that way; it is not just an issue for the Energy Ministry.

I would hate to think of energy as solely the responsibility of the state. The bulk of investments are coming from the private sector, so you have to include them and take their views. This is not occurring at a desirable level. 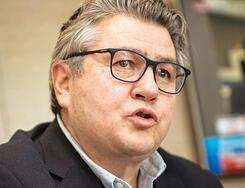 WHO IS MEHMET ÖĞÜTÇÜ?

Mehmet Öğütçü has an extensive portfolio of executive and non-executive roles in the oil and gas, glass, food and beverages, and mining sectors. Currently, he chairs Global Resources Partners, a U.K.-based strategic investment advisory group, and the Bosphorus Energy Club. He also sits on the boards of Genel Energy, Şişecam Group and China’s Belt and Road Initiative, and serves as Special Envoy of the Energy Charter for the MENA Region.

Between 1982 and 2011, Öğütçü served as advisor to the Turkish prime minister, was a diplomat in Ankara and Beijing, worked as a senior staffer for the International Energy Agency and OECD in Paris, and joined the British Gas Group in London. He also served on the advisory boards of multinational energy, cyber-security, strategic communications and financial services companies including Invensys, Dimetronics, the Windsor Energy Group, and KCS Security.

Öğütçü is the author of several books and his new book, “A New Geopolitical Journey for Turkey,” is forthcoming. |